Little leaguer’s elbow is an overuse condition seen in adolescent baseball player’s, hence the name, that can be a cause of pain located on the inside of the elbow (medial). With too much repetitive throwing of a baseball the growth plate on the inside of the end of the elbow, known as the medial epicondyle, becomes inflamed. Little leaguer’s elbow is known as an apophysitis which refers to chronic inflammation of the growth plate. Elbow pain in general in the adolescent pitcher is not uncommon and occurs in up to 40% of throwers.

Repetitive overhand throwing of a baseball, most commonly seen in little league adolescent pitchers, can lead to cumulative traction stress being placed on the inside of the elbow. During the overhand throw, the inside of the elbow (medial) has traction placed on it while the outside of the elbow (lateral) has compression placed on it. This repeated traction on the medial elbow pulls at the growth plate and it becomes irritated and inflamed. A similar mechanism causes “valgus medial overload syndrome” in adult pitchers and can even lead to an ulnar collateral ligament injury as made famous by Tommy John.

Who is most susceptible to Little Leaguer’s Elbow?

Little leaguer’s elbow most commonly occurs when an adolescent baseball pitcher throws too many pitches in games and does so on too often days. This leads to a cumulative number of throws that exceeds the forces that the growth plate on the medial side of the elbow can withstand. Pitchers who play in more than 1 independent league may pitch too often when asked to do so in both leagues. Also, certain pitches like a curveball and breaking pitches seem to put more stress on the immature elbow and therefore should be limited until someone is older.

Little League® Baseball and Softball is the world’s largest organized youth sports program, with millions of players shares the eligibility of a player to pitch in a Little League® baseball game is governed by a tiered pitch count that is tied to the number of pitches throw in a game. The pitch count determines how many days of rest are required before said player may pitch again in a Little League game.

Below you will find a break down of the regular season pitching rules for Baseball and Softball.  The manager must remove the pitcher when said pitcher reaches the limit for his/her age group as noted below, but the pitcher may remain in the game at another position:

Exceptions and other considerations can be found at Little League® Baseball and Softball. 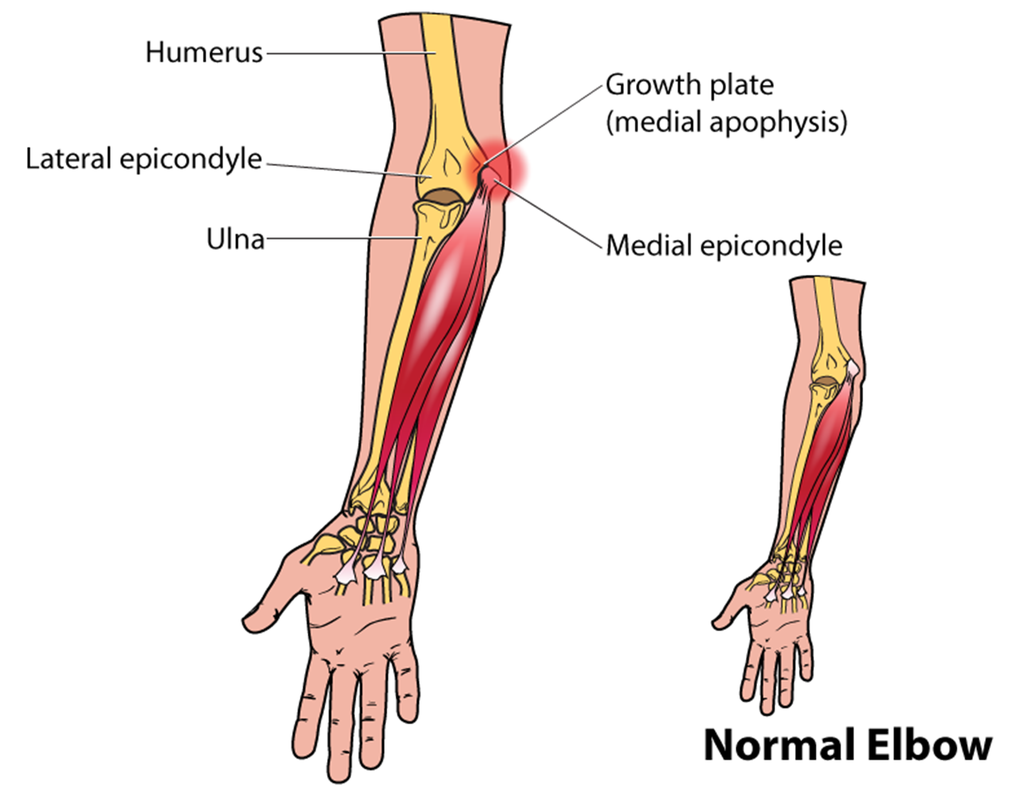 The elbow is a complex joint where the ends of three bones come together. The end of the upper arm bone (humerus) meets the end of the two forearm bones (radius and ulna). The radius is on the outside (lateral) of the elbow while the ulna is on the inside (medial) of the elbow and also includes the olecranon, or tip of the elbow that you can feel. There are also many ligaments and muscles around the elbow which contribute significantly to its stability and function. There are many growth plates in the elbow and in adolescents all their elbow growth plates have yet to fuse, ie. not yet reached skeletal maturity. In adolescents, the growth plates are the weak link in the elbow during the throwing motion as opposed to the ligaments as in adults. The specific phases of the overhand baseball pitch that place the highest forces on the medial growth plates are the “late cocking” and “early acceleration” phases. Excessive elbow stress during these phases leads to high compressive forces on the medial side of the elbow and lead to little leaguer’s elbow in adolescents and ulnar collateral ligament injuries in adults.

Little leaguer’s elbow is suspected in an adolescent-aged pitcher, typically ages 9 to 14, who complains of pain on the inside of their elbow. They will have pain that is present with throwing and is likely worse when they throw more innings. The patient may have had a recent increase in the number of innings thrown or the number of games pitched. The pain itself is focal to the elbow. There should be care to evaluate the entire elbow and extremity to be sure there is no other injury present including nerve injury.

What advanced imaging tests are necessary?

The mainstay of treatment for little leaguer’s elbow is non-operative. The patient should undergo a period of complete rest from throwing for 4 to 6 weeks at a minimum. During this period throwing of any kind is strictly prohibited. A strengthening and endurance program should be initiated to maintain cardiovascular fitness and to focus on overall core strength. Often adolescent aged athletes have poorly developed core strength and overall body control which can make them susceptible to poor throwing mechanics and injury. Regular icing and anti-inflammatory medication should be used early on when the patient is symptomatic.

Following the initial 4 to 6 week period of no throwing and only when the patient is completely pain free, a structured throwing program should be initiated over the next 6 to 8 weeks. During this time, the pitcher should be evaluated by a specialized physical therapist to evaluate and correct their throwing mechanics. Any pain during the rehab period should cause the athlete to temporarily pause their program for a short period until they can throw without symptoms.

Typically it takes about 12 weeks for an injured athlete to return to competitive throwing in a game situation. Special attention should also be paid to the number of pitches and to the types of pitches thrown by the pitcher. Higher stress pitches like a curve ball or breaking ball should be avoided until the pitcher reaches the appropriate age. Also, the athlete’s core and shoulder strengthening program should be continued year round to maintain and further develop their strength and muscle control.

It is extraordinarily rare for an adolescent athlete with little leaguer’s elbow to require surgery. The only reason that this might be necessary is if a lose body breaks off from the end of one of the bones around the elbow and begins to catch or get stuck impeding elbow motion. This would require removal with either elbow arthroscopy or a small incision. Following surgery, the athlete will have a period of time during which they will not be able to participate in competitive throwing while their elbow recovers from surgery.

Pitchers league age 14 and under must adhere to the following rest requirements:

Pitchers league age 15-16 must adhere to the following rest requirements:

College athletics is certainly at a crossroads these days, with the landscape changing daily—sometimes hourly, even. Keeping track of which leagues and schools are competing, which sports seasons are intact, which are…

Golf A Health, Fitness Ace In The Hole With Safety Guidelines

One of the first sports to get back in to the swing, so to speak, as COVID-19 restrictions began to ease in various locations across the country, is golf. Obviously, its large,…

The importance of heat safety and hydration in workouts is not lost on today’s generation of coaches and athletes. Gone are the “Junction Boys” days of water deprivation and unsupervised two-a-days in…

The crowded space in all areas of footwear can be well…difficult to navigate for anyone. From all levels of shoes for competition and casual and work, to all the areas tied to…

The Benefits of Ambulatory Surgery Centers for Athletes