Zachary Lystedt suffered a head injury in an 8th grade football game, but returned to the field and continued playing. The star athlete played the entire game before collapsing on the field. He was diagnosed with second impact syndrome (SIS). He is now disabled, and his family has devoted their time to preventing other young athletes from suffering the same fate.

Because of the efforts of the Lystedt family, there is now legislation in the state of Washington to protect young athletes who have suffered a concussion from reentering a game without a medical release from a sports medicine professional. Similar legislation is being written across the country following the model of the law named after Zachary Lystedt.

His story and others just like it have been the driving force behind the current push across this country to makes sports safer for young athletes. Change starts with education and awareness.

What is Second Impact Syndrome?

Second impact syndrome occurs when an athlete returns to sport too early after suffering from an initial concussion. The athlete does not need to receive a strong second blow to the head to set the effects in motion. The athlete may receive only a minor blow to the head or a hit to the chest or back that snaps the head enough to have the brain rebound inside the skull.

The pressure to the brain increases rapidly causing brain death in as little as three to five minutes. Because brain death is so rapid, second impact syndrome has a high fatality rate in young athletes.

The actual incidence of SIS is not well documented in the literature (Bey, T. & Ostick, B., 2009). This may be because the symptoms of SIS are the same as a severe brain injury. If a good medical history cannot be obtained identifying an initial head injury, SIS may go undetected. 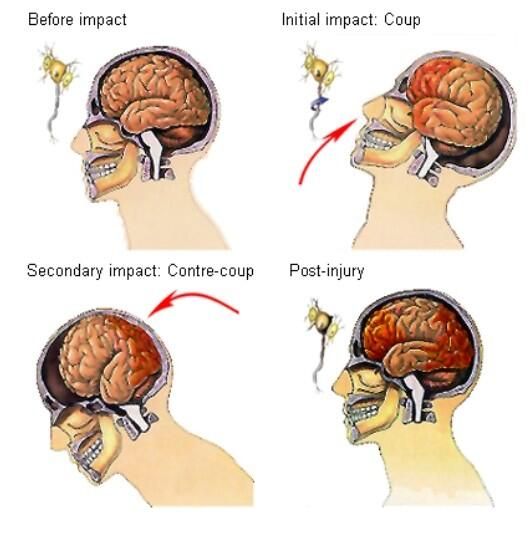 If a brain injury is suspected, an immediate computed tomography

(CT) of the head should be ordered. A CT scan is more sensitive than an MRI to detect acute intracranial bleeding. A thorough medical history specifically regarding the mechanism of injury and history of head injury should be obtained from the patient if the patient is conscious or from an eyewitness if the athlete is rendered unconscious.

The condition worsens rapidly will loss of consciousness, loss of eye movement, dilated pupils, coma, and then respiratory failure. This can all take place within minutes on the sideline.

Because this is a life-threatening emergency, life-saving measures must be taken within minutes for there to be any hope for the athlete. Treatment should be undertaken to maintain an airway, and to provide rescue breathing and CPR if necessary.

Who gets Second Impact Syndrome?

Any athlete may be at risk for SIS if he/she returns to sports competition while still experiencing the symptoms from an initial injury. According to a study published in the Journal of Athletic Training (2007) and published on Neurotrauma Research Laboratory website, between 1.6 and 3.8 million sport-related concussions occur every year.

The collegiate sports with a higher incidence of concussion include in descending order using injury rate per 1000 athletes exposed (IR/AE):

It is logical to conclude that sports in which concussions are more prevalent will also be sports in which athletes will be more at risk for SIS. According to Sullivan, J.A., and Anderson, S.J. (2000), SIS is most often reported in boxers and football players.

Education regarding the proper diagnosis and management of a concussion (especially in light of recent research) needs to occur throughout sports communities at all levels of involvement including the athletes, parents, coaches, athletic administrators, physicians, and sports medicine personnel. As awareness increases as to the dangers of SIS and the importance of proper management for an athlete with a concussion, the incidence of SIS should begin to decrease.

Schools, colleges, and universities that do not heed the warnings and do not properly treat concussions may end up paying the price along with the injured athlete.

Preston Pleverete suffered a catastrophic second impact syndrome in November, 2005. He had sustained an initial concussion one month earlier and it had been determined that he had not received the proper treatment for his concussion. He continued to play football and was knocked unconscious while playing football for La Salle University when he collided head-on with an opposing player during a football game.

Although the surgeons were able to remove a massive blood clot from his brain and his life was saved, Preston suffered irreparable damage to his brain and still struggles to walk and talk.

The Pleverete family received a settlement from La Salle University for $7.5 million because the jury found that the school failed to treat Preston’s first concussion properly ultimately resulting in second-impact syndrome.

The treatment for SIS is to stabilize the patient with a special emphasis on airway management. Once the CT scan has been completed and the CT scan confirms that there is an increased intracranial pressure, the goal is to “normalize the elevated intracranial pressure by restricting cerebral blood flow or fluid to the brain tissue” (Bahr, R., & Maehlum, S., 2004). Possible treatments include hyperventilation, diuresis, fluid restriction, blood pressure control, steroids or surgery when indicated.

As stated above, second impact syndrome. Patients that survive may suffer from permanent neurological symptoms including impacting the following systems:

Brain-injured athletes whose pupils are “fixed and dilated” after a pupillary light test have a poor prognosis and have been found to never regain independent daily function (Bahr, R. & Maehlum, S., 2004).

Any athlete who demonstrates or complains of symptoms of concussion including headache, disorientation, confusion, nausea, vomiting, dizziness, and fogginess should be IMMEDIATELY pulled from the activity and be referred to a sports medicine physician for follow-up care. Undertreating or not taking a possible concussion seriously is just too high a price for an athlete to pay.

Why I am so mad about Davante Adams returning to the game after a concussion?