Tibial Plateau Fracture Surgery is required when the bone breaks into two or more fragments and surgery is normally needed.  This fracture involves the proximal (upper) portion of the tibia which extends through the articular surface (into the knee joint).  It is a serious type of knee injury that can affect all types of men and women athletes.

Tibial plateau fractures occur by three main mechanisms. The first is by a medial or lateral based force (such as the so called “bumper fracture” when a car’s bumper strikes the outside of a person’s leg creating a valgus, or inward, force across the knee). The second mechanism is by a pure axial, or compressive force (such as a fall from height). The third mechanism is by a combination of both axial and medial or lateral directed force.

Tibial plateau fractures are diagnosed using a combination of physical examination and adjuvant imaging modalities. The entire limb is examined to evaluate the status of the soft tissues, whether there are associated wounds or lacerations (which could indicate an open fracture) as well as the neurologic and vascular status of the limb. The presence of an impending compartment syndrome (uncontrolled rise in the pressure within the limb) is also carefully scrutinized as well as this could require urgent surgical fasciotomies (open decompression of the affected compartment). Common signs of compartment syndrome are full or tense compartments as well as severe or escalating pain with passive stretching of the affected muscles. Later signs include decreased pulses, weakness and paresthesias (sensory changes). Furthermore, the collateral ligaments about the knee – Medial Collateral Ligament (MCL) and Lateral Collateral Ligament (LCL)) are examined as well as the cruciates – Anterior Cruciate Ligament (ACL) and Posterior Cruciate Ligaments (PCL), and also the menisci, although this can be difficult given the proximity of the fracture. 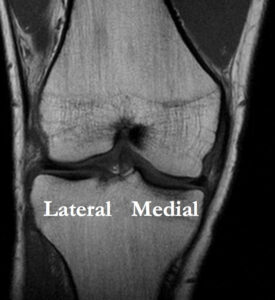 assessed with standard radiographs (x-rays) and the decision is made whether more advanced imaging techniques are needed. CT scans provide an excellent view of the cross-sectional and bony anatomy that provides the surgeon with a 3-dimensional depiction of the fracture. MRI is most helpful in delineating the potential soft tissue injuries associated with the fracture, particularly the medial and lateral meniscus, ACL, PCL as well the MCL and posterolateral corner structures of the knee. Arteriogram is considered when there is a suspected vascular injury. When there are unequal pulses or any other signs of vascular insufficiency, an arteriogram is the gold standard for evaluation of an arterial injury. 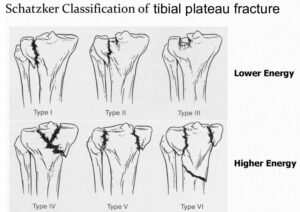 The Schatzker classification is divided into six types:

Management of type I, II, and III fractures focuses on evaluating and repairing the articular cartilage. The fracture-dislocation mechanism of type IV fractures increases the likelihood of injury to the peroneal nerve or popliteal vessels. In type V and VI fractures, the location of soft-tissue injury dictates the surgical approach and the degree of soft-tissue swelling dictates the timing of definitive surgery and the need for provisional stabilization with an external fixator.

Tibial plateau fractures can be treated both surgically and non-surgically, depending on the nature of the fracture.

Initially, sports injury treatment using the P.R.I.C.E. principle – Protection, Rest, Icing, Compression, Elevation can be applied to a tibial plateau fracture. Nondisplaced fractures of the tibial plateau can often be treated non-operatively with a period of non-weight bearing with a hinged knee brace. Any period of limb immobilization should be kept brief as knee stiffness must be avoided. The knee is commonly locked in full extension for 1-2 weeks with the amount of flexion gradually increasing with time.

The most important factors in determining the necessity of surgery are mechanical alignment of the limb as well as the articular congruity. The mechanical alignment refers to the mechanical axis of the lower extremity. Injuries that alter the axis of the limb, particularly those that place the patient in varus (“bow-legged”) alignment have a poorer prognosis. Fractures that involve a step-off or incongruity of the articular cartilage also have a guarded prognosis, although the exact amount of displacement that is considered significant is controversial.

Surgery is indicated for open fractures, displaced fractures and fractures that alter the mechanical alignment of the limb. Temporary knee spanning external fixation is indicated for high-energy fractures with significant soft tissue injury. Definitive fracture fixation can be achieved by a variety of approaches and methods, the exact techniques of which are beyond the scope of this article. Generally, however, tibial plateau fractures can be surgically treated by two main techniques.

The other surgical technique involves the use of plate and/or screw fixation. The skin is incised medially, laterally and/or posteriorly depending on the nature of the fracture and the fracture fragments are reduced and fixed with metallic screws and possible plates. This technique allows anatomic reduction of the joint, restoration of the alignment of the limb, and joint mobility but compromises soft tissues and possible periosteal (outer bone layer) stripping which raises the possibility of infection and nonunion. The implants (plate and screws) are often left in the patient for life but can be sometimes removed after bony healing if the hardware becomes painful or cosmetically unacceptable.

Two other surgical techniques warrant mention. The first is arthroscopy that can be used as an adjuvant to fracture fixation as it allows a minimally invasive method to evaluate joint congruity without requiring an open joint exposure. The second involves using bone graft or bone graft substitute to reinforce fracture fixation as well as filling bony voids caused by the injury. The bone graft can be harvested locally or from another location on the body (commonly the iliac crest). This is referred to as autograft. The bone can also come from a sterilized cadaveric donor. This is referred to as allograft. There are also many types of bone graft substitutes that can be used as well, all varying in their structural and biological properties.

Several complications are associated with the nonoperative and operative treatment of tibial plateau fractures. With both methods, nonunion (failure to heal, or unite) of the fracture can occur. Articular (cartilage) injury to the knee joint occurring during the trauma itself can lead to post-traumatic arthritis of the joint. Arthrofibrosis (stiffness) of the joint can occur if range of motion exercises are not instituted early enough after the injury. Infection can also occur post-operatively, particularly if surgery is done through compromised soft tissues. Deep venous thrombosis (blood clots in the leg and thigh veins) can occur secondary to the trauma or prolonged immobilization. Residual swelling of the limb can occur in the post-operative limb and is more commonly associated with high-energy fractures. Finally, unrecognized menisci or ligamentous injuries associated with the fracture can cause significant morbidity.

Since the tibial plateau involves a major weight bearing joint, the outcome is tied significantly to the resultant alignment and articular congruity after fracture healing. If the joint is stable with good alignment, articular congruity and no loss of joint motion, good results can be expected. If infection, nonunion, cartilage injury or associated soft tissue injuries are not addressed, the outcome is much more guarded.