A sprained finger is common in sports with the most common injury being a sprain to one of the ligaments located within the finger. Each finger has three small bones (phalanges) separated by two interphalangeal joints. The thumb is unique and has one interphalangeal joint and only two small phalange bones.

A sprain is an injury to a ligament. Each of the joints located in the finger has collateral ligaments that run along each side of the joints. It is these collateral ligaments that are commonly sprained in sports. Athletes in sports that use balls are the most at risk for a sprained finger including athletes competing in the sports of basketball, baseball, and softball.

Classifications of a sprained finger?

A sprained finger is classified from mild to severe and is diagnosed as first-degree, second-degree, or third-degree sprains. 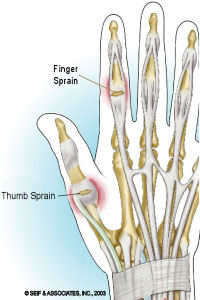 Is considered mild because the ligaments are only stretched and not torn. The athlete may complain of localized swelling and pain around the injured joint. The athlete’s ability to flex and extend the finger may be somewhat limited due to the swelling within the joint. Last, the strength of the finger is usually not affected.

In most first degree sprains, the athlete is able to continue participating in sports. However, the athlete may benefit from taping the injured finger to an adjacent finger to prevent further injury.

This type of injury results in significantly more swelling and pain. The swelling may extend throughout the finger within the first few hours possibly limiting the range of motion of both joints within the finger. The joint may also be tender to touch specifically over the injury site.

Is the most severe sprain resulting in a complete rupture of the ligament. A full ligament rupture usually occurs at its attachment, but may also occur in the middle of the ligament. In some cases, the bone can actually be pulled away from the distal attachment causing an avulsion fracture.

A third-degree sprained finger is often associated with a subluxation or dislocation of the finger. A subluxation is a partial dislocation that reduces itself and the athlete may not even realize that it has occurred.

A sports medicine professional can diagnose a sprained finger given a thorough medical history and comprehensive physical assessment. If a third-degree sprain is suspected, an x-ray can be ordered to rule out a possible fracture.

The force of the blow at the end of the finger reverberates up the finger to the joint causing the joint to either hyperextend or move sideways. Either one of these movements can injure the collateral ligaments in the fingers.

Another mechanism of injury in sports is catching a finger in a jersey or piece of sports equipment. If the force is stronger than the tensile strength of the ligament, the ligament can be stretched or torn.

Once a fracture has been ruled out, sports injury treatment using the P.R.I.C.E. principle should be utilized. Ice can be applied for twenty minutes every two hours either through the use of a small ice pack or cold water immersion.

Coldwater immersion is an effective treatment for a sprained finger because the cold water can surround all of the injured area rather than just one side of the finger as in the application of an ice pack. Coldwater immersion can easily be accomplished with the use of a large cup, water, and the addition of some ice.

An athlete with a second-degree sprain should have the finger splinted by either buddy taping the injured finger to the adjacent finger or by utilizing an aluminum splint. The finger should be splinted so that the injured joint and adjacent bones are immobilized. Aluminum splints can be custom cut to fit and bent to accommodate most finger injuries. 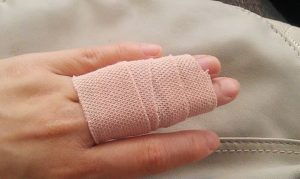 Because there is more tissue damaged in a second-degree sprain, the finger will swell more and may have some discoloration. As in a first-degree sprain, the athlete should utilize the P.R.I.C.E Principle for the first 48-72 hours.

As the swelling begins to diminish, the athlete can begin gentle range of motion exercises to begin to regain the flexibility of the finger. This can be accomplished using a number of different items including a tennis ball, racquetball, or rolled sock.

The athlete places the object in his/her hand and gently squeezes. This exercise increases both the range of motion of the joint plus the strength of the muscles in and around the injured joint. The athlete gradually squeezes the ball and then relaxes. This can be performed ten times every hour.

Care should be taken for the athlete not to squeeze so hard that it causes pain. As the ligament and tissue heal, the athlete can gradually increase the intensity of the grip on the ball.

An athlete with a third-degree sprain should be seen by a sports medicine physician and may need to have the injury surgically repaired.

Sprained Finger and When to See the Doctor

Returning to sports with a sprained finger

Because long term swelling is fairly common in sprained fingers, gaining full flexibility can take a long time. In some cases, the joint can look swollen for up to one year post-injury.

Most athletes return fairly quickly to sport after a sprained finger, but will utilize a buddy tape job to protect the finger from further injury. The finger should be taped to an adjacent finger above and below the injured joint with ½ inch athletic tape. This ensures that the joint is protected, but also allows the athlete to flex and extend his/her fingers as needed.

Physical fitness strengthens your children’s bones, muscles, lungs, and heart. But did you know it can also improve their academic performance? Read on to find what the latest evidence says. Increasing your…

In my humble opinion, peanut butter (PB) is one of the best sports foods around. Not only is it yummy, it is also health-promoting and performance enhancing. A review of the research…

A medical second opinion is a legal and empowering tool to improve patient-physician relationships and optimize treatment outcomes.  Orthopedic injuries are one of the most common injuries, affecting about a million…

How Much Sleep Do Spartan Athletes Need?

Both empirical and scientific evidence shows that the more physically active you are, the more sleep you need. As such, Spartan athletes’ sleep requirements are higher than those for an average person. …

“Rest and medications provide short-term recovery from cyclist’s palsy symptoms. However, exercises, changes in cycling habits, and the use of appropriate gloves and hoods are crucial for an effective cure.” What is…

If you have a dull, nagging pain in your wrist, it might be wrist tendonitis. Learn about its symptoms, causes, treatment options, and home remedies.   What is Wrist Tendonitis? Wrist tendonitis occurs…