The female athlete triad is a complex physiological response of the body in young women involved with disordered eating and intense exercise. Although this is seen in athletes who gravitate towards sports that are extreme in caloric expenditure (i.e., cross country), it is not known exactly how the disorder begins.

However, what is known is that this disorder involves a complex psychological component and that the successful treatment involves a team approach including the athlete’s primary physician, a registered nutritionist, a psychologist, a psychiatrist (if medication is prescribed), an endocrinologist, and sports medicine professional.

What is the female athlete triad?

The Triad includes the elements of disordered eating (anorexia nervosa, bulimia nervosa, or combinations of both), amenorrhea (cessation of menstrual cycle), and early-onset osteopenia or osteoporosis. The latter two components are the physiological response of the body to very low body fat percentage, hormonal irregularities, and low mineral content of the bones from reduced caloric intake.

The various signs and symptoms associated with the female athlete triad syndrome include:

How do eating disorders affect performance in an athlete?

Although there are many causes of eating disorders in young women, women may gravitate towards sports to help burn the calories that they take in. Excessive exercise in combination with disordered eating is a dangerous combination.

Healthy women athletes should have a body fat percentage in the range of 16% – 22%. The average healthy range for the female population’s body fat is slightly higher and in the range of 20% – 25%.

Females need to understand that fat is necessary for the healthy functioning of the body. 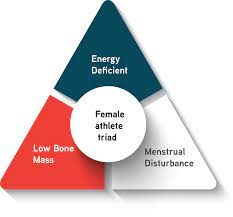 While fat acts as an insulator (helps warm the body), it also is a source of stored energy and surrounds the internal organs of the body acting to protect vital organs.

Healthy female athletes should have a combination of both subcutaneous body fat and lean muscle mass. In order to understand why depriving the body of nutrients is dangerous for athletes, one must understand the physiology of how the body burns energy.

Assuming that we start with a healthy female body (20% body fat, adequate lean muscle mass), when an athlete does not consume enough calories for the energy needed to perform, the body initially converts stored body fat to energy to supply the necessary fuel for the body.

This means that the body will start converting stored body fat to energy to be used by the body during exercise. Initially, the athlete will begin to lose subcutaneous body fat. Her appearance will change and her clothes will begin to feel loose.

Strong muscles are necessary for athletes to be able to compete and function at a high level. When the body begins to use the lean muscle mass for energy, the muscles will lose their strength and begin to lose their size.

At this point the body is trying to save itself by using its own tissue as fuel to continue to function. By this point, the athlete’s performance will begin to suffer. Not only will the athlete feel weak, she will not be able to sustain an intense workout.

It is important to note that athletes involved in disordered eating are adept at hiding the problem. Athletes may wear longer and larger clothes to hide their underlying appearance.

Denial of the problem is also a characteristic of disordered eating. An athlete will often deny that there is a problem. This is why if there is any possibility of an athlete with an eating disorder, the diagnosis needs to be based on objective measurements and not by assumptions.

Amenorrhea and oligomenorrhea (infrequent menstrual bleeding) are both side effects commonly seen in athletes. Because the menstrual cycle results from hormonal interactions, any reduction in these hormones can affect the athlete’s menstrual cycle.

The prevalence of amenorrhea has been reported to be fairly high in the athletic population with some published reports as high as 66%. This is a concern because amenorrhea in the general population is between 2% – 5%.

In many athletes, it is difficult to separate extreme exercise from disordered eating as the primary cause of amenorrhea. One of the side effects of anorexia is amenorrhea. However, it is also common to see amenorrhea in women with intense exercise regimens but who have normal eating patterns.

There are two theories as to the cause of exercise-induced amenorrhea in athletes. The first is that the extreme demand of energy on the body versus the amount of calories consumed creates an “energy-drain” that leads to hypothalamic dysfunction. This in turn leads to low estrogen production resulting in amenorrhea.

Either way, the hypothalamus is believed to be a key component in the cessation of the menstrual cycle for high level female athletes. Because of this, an endocrinologist may need to be involved in the care of these athletes to help regulate hormonal levels.

It is the lack of estrogen that puts female athletes at risk for premature bone loss. It is precisely this reason that young athletes need to be carefully monitored for hormone levels to ensure that their bones stay strong and healthy.

Relative Energy Deficiency in Sport (RED-S) is the term used to describe the root cause of a range of performance depleting symptoms common in athletes who are under-nourished.

Low energy availability lies at the center of RED-S, and it is directly related to a whole host of complications that can result when athletes aren’t adequately fueled, not only for their athletic performance, but to sufficiently meet their body’s physiological needs to support healthy functioning.

How is bone loss associated with the female athlete triad?

Research has shown that bone density can be increased through the intake of calcium combined with weight-bearing exercise. Athletes who do not have sufficient calories to support their body’s needs may also be deficient in their calcium intake.

Studies have shown that athletes tend to have greater bone mineral density than the general population. To some extent, this may help some athletes who have disordered eating to maintain their bone mineral content for a time.

However, if a pattern of disordered eating is kept up over time and calcium is not adequately provided in the diet, the bone mineral density can begin to decrease. This can lead to weakness in the bones and possible fractures.

Great care must be taken when confronting an athlete who may be suspected of having the female athlete triad. The initial approach should focus on the whole athlete and not on specific eating behaviors.

Lab tests should be run to determine the athlete’s body fat percentage, hormone levels, bone density, and weight. These results should be monitored over time.

After an initial medical referral has been completed, the sports medicine professional needs to work closely with the athlete’s coach and the athlete’s medical team to ensure continued progress and compliance from the athlete.

According to the NCAA Sports Medicine Guideline (Hostetter, K. & Drummond, J., 2010), an athlete is restricted from participation until the following criteria are met:

However, as noted in the case below, these are minimum guidelines and may not be enough for a full recovery.

A recent case study published in Athletic Therapy Today (May, 2010), highlighted the difficulties of treating an athlete diagnosed with female athlete triad. The athlete in the case study struggled with the Triad for more than seven years.

The athlete was initially cleared to participate in college sports by her personal physician. As an incoming college freshman, her height was 5’3” and her weight was 85 pounds. She also had a history of amenorrhea for three years. Because the athlete had been cleared by her own physician, the sports medicine professional did not push the issue.

One year later during her preparticipation physical exam her sophomore year, this athlete had lost five more pounds. She was also found to have a body fat percentage of 7%, well under a healthy level for any female. Although she was referred for counseling and also to a registered dietician to facilitate weight gain, the professionals she was referred to did not have experience dealing with this specific disorder. The athlete was later found to be non-compliant with her treatment program.

Although she increased her weight going into her junior year, she developed lower leg pain and was diagnosed with a left tibia stress fracture. The bone scan also revealed bilateral tibial osteopenia (thin periosteum, outside portion of a long bone), and previous stress reactions in the tibia, foot, and pelvis.

The athlete was placed into the care of experienced professionals her senior year, but she did not have the same support after graduating and returning home. Unfortunately in this case, the athlete reverted back to prior habits of counting calories and overtraining.

The lesson learned from the certified athletic trainer involved in this case study was that knowledge about the disorder is not enough. If an athlete exhibits any signs of the female athlete triad, she needs to be promptly placed into the care of a team of experienced professionals. Further, the athlete’s progress needs to be carefully monitored between the medical team and shared with the sports medicine professional to monitor progress and compliance.

Because the Triad is caused by complex psychological factors and physiological responses, an athlete with this disorder needs to be confronted early and treated with a comprehensive medical approach. Successful behavior changes can be achieved with early intervention, close monitoring, and a team of experts working together with the athlete to overcome this challenging disorder.

Ever heard of the female athlete triad? REDs?

@female_athletetriadawareness (Instagram) have written a short yet touching story on their recovery from the syndrome. We are certain it will help you or someone you know…https://t.co/erutDiJP5N pic.twitter.com/5HsWLQ4eTH