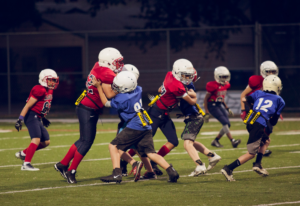 There is no shortage of reports citing studies that participation in youth football is on the decline. Whether it’s because of fear of concussions/head trauma, other injuries, cost for school districts, or just interest in other sports like soccer (or esports, which doesn’t get kids outside and active). Statistica has the drop at 38%, from 8.4 million in 2006 to 5.22 in 2018 (people over age six). Studies on football to CTE are making the connection between the two appear clearer than ever.

While the NFL tries to promote youth football through flag (and, yes, still tackle) leagues, and while organizations like the Concussion Legacy Foundation continue to campaign against tackle football, and the NCAA places more emphasis on targeting and helmet-to-helmet hits, another group is trying another approach. It’s called TackleBar, billed as a modified version of the game with full equipment but with the addition of a harness with two foam bars on the lower back, with the removal of either ending a play. It combines the effect of not needing a bone-crushing hit or hard contact with the ground that flag offers, with retention of good tackling technique, according to its proponents. 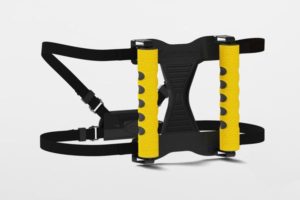 Citing a study published in the Orthopaedic Journal of Sports Medicine this month, TackleBar CEO Tim Healy emphasizes the increased safety of his version of the sport.

“We are incredibly proud of those numbers, and it proves what we’ve known all along: TackleBar is a safer version of the game because it eliminates the big hits and requires players to use proper technique,” he said. “We’ve been hearing stories for the last three years about how much safer TackleBar is. Now, the data supports what we’ve been hearing from parents and coaches.”

The Orthopaedic Journal findings, noting that TackleBar has a seven times lower injury rate than other forms of football, was conducted by a team led by Dr. Uzma Samadani, MD, PhD. The research followed nearly 1,000 nine-to-14-year olds over three months, encompassing 56 teams and 16,000 practices and games.

“What is important for children is to get them active – to get kids outside playing and running around,” said Dr. Samadani. “Kids love football and reducing risk associated with conventional tackling is logical. Our work investigating injury rates in football and its alternatives ensures parents, coaches and league administrators have vital information to make decisions in the best interest of our kids. Our study shows that TackleBar has a more favorable safety profile than other forms of football.”

At least one major equipment manufacturer has taken notice, as Riddell, whose interest in turning around football’s participation numbers is high, has partnered with TackleBar to spread the word. TackleBar notes that Riddell’s sales reps are working with coaches and administrators on demonstrating how the equipment helps promote proper technique, even when moving to full-contact practices and games.