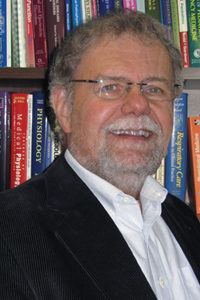 From pregnancy cramps and fatigue to keto flu and poor exercise performance, electrolyte loss is certainly no one’s favorite summer pastime. Intensified during the warmer months, electrolyte loss can contribute to a number of uncomfortable symptoms. Electrolytes are the performance powerhouses of the body, critical to optimal body efficiency and function. But not all electrolytes are equal – there’s a reason why elite athletes worldwide use ours in training and competition – and it’s important to learn the ins and outs of these essential elements.

Mid-year brings warmer days, and with those warmer days the reality of finding yourself a bit sweatier than you did a few months prior, even after seemingly non-taxing activities. Those spots under our arms may make an appearance more often during the summer months, but dehydration is still a threat, albeit not as noticeable, in the cold as well. Dehydration isn’t the only thing to worry about — water loss also causes a drastic change in electrolyte concentration and balance, which can lead to weakness and cramps. Electrolytes are essential for a fully-functioning body – something that’s a necessity all year long

Plain water has no electrical character – it’s the stuff in the water that has a conductive nature.  Being the universal solvent that it is, water will easily combine with almost any reasonable compound, for example, salt.  Regardless of location, most water on earth has some salt, but may contain other minerals as well. Because it is positive at one end of the molecule and negative at the other, water is one of the best solvents.  This polarity affords a strong attraction to other molecules, making water a medium for several conductors—electrolytes. This is the reason all the body’s cells can communicate with each other. Like a line between calls, hydration simply acts as the messenger that facilitates electrolyte activity.

It’s no secret that people sweat. It’s pretty easy to see, and at times, smell. We can lose between twenty-four and forty-eight ounces of water a day, some as liquid, some as vapor. The body carries a few million sweat glands.  The apocrine sweat gland, found in the hair of the scalp, armpits and groin, is high in fat and can carry an odor when mixed with bacteria on the skin. The eccrine glands carry a different kind of sweat: lightweight and odorless.  Mostly water, sweat contains about one percent of fat and salt. Its job is to cool the body and to dissipate heat, something we notice in the warmer months more than at other times of the year because output exceeds evaporation, causing beads of liquid form on the skin.  If you were to taste it, it’s salty.

We might hear a lot about sodium-sensitive blood pressure, but the less common conversation is of salt’s indispensable contribution to existence.  Without it, the fluid surrounding our cells is virtually devoid of electrical quality. Sodium escorts nutrients into cells to be used for energy and tissue growth and repair.  Without it, muscle contractions and nerve impulses are misdirected. Sodium is not found in nature by itself because it has the nasty habit of forming flammable hydrogen when in contact with water, which is enough of an oxidizer to cause an explosion.  It’s funny that so violent a substance, in the presence of the highly toxic chlorine gas, can make a substance necessary to human health—table salt.

Where sodium helps to initiate a muscle contraction, from movements as simple as picking up a pencil to as strenuous as curling the heavy dumbbells, potassium helps to relax the muscle.  Potassium is the primary electrolyte found inside the cell, opposite to its counterpart. Like sodium, it is excreted in urine and sweat, and may be sacrificed to the blood pressure control mechanism of some diuretics.  Transporting glucose into muscle cells, potassium encourages balance of the other electrolytes. Fatigue, confusion and cramps are signs of falling levels. Sodium may elevate blood pressure and potassium may reduce it – the balance of these two is essential to cardiac well-being.

Another well-known element, magnesium is more than just a pretty face that helps to make and improve bones and teeth.  It’s a part of more than 300 enzymes involved in body processes that include muscle contraction, nerve transmission and ATP production.  Persistent exercise sacrifices some magnesium, whose ions interact with those of phosphate to support the basic nucleic acid chemistry of life.  This element is so important to plants that it’s the central atom of chlorophyll and, in the human body, it correlates with potassium to relax a muscle contraction.   The lack of both magnesium and potassium in the food supply of the United States is disheartening and due largely to hybridization and wretched agricultural and kitchen practices, all in the name of prosperity. Unfortunately, these necessary elements are becoming increasingly harder to find in the American food supply, largely due to food hybridization and inefficient agricultural practices.

Seldom heralded as an electrolyte and more commonly as a bone-builder, calcium nudges sodium to action, causing a muscle contraction.  If one’s diet is calcium-deficient, muscles (especially the heart) will pull it from bone to get the contraction/relaxation show on the road. Calcium is not usually found in an electrolyte replacement drink because dissolvability is a challenge and most of us take a supplement at the recommendation of our physicians.

There’s no argument that adequate fluid replacement maintains hydration, thus promoting health and safety, while helping to ensure optimal physical performance.  But forgetting the electrolytes is comparable to leaving the lamp unplugged and calling an electrician because you’re in the dark. If you’re an athlete, be sure to get the proper nourishment in the 24-hour period prior to a competition, and at least a pint of fluid two hours before the activity.  If your event lasts longer than one hour, you’ll need electrolyte replacement and possibly a carbohydrate to restore glycogen reserves. An endurance athlete will lose between 20 and 40 ounces of fluids an hour. A sodium-rich electrolyte will stimulate thirst and help to retain water, a liter of which will be necessary for each hour of grueling sport.

Potassium helps to carry glucose to muscles, but also interacts with sodium and chloride to balance electrolytes and to conduct nerve impulses.  When glycogen breaks down to supply energy, muscle cells become potassium-shy. At this point there is more potassium in the blood, resulting in an elevation of potassium in urine.  Because of this you get nauseous, experience slower reflexes and heartbeat and feel drowsy and fatigued. On the other hand, too much of this electrolyte can be hazardous. After all, potassium is used in lethal injections.  Insulin however, helps escort potassium to where it needs to go, meaning that eating carbohydrates during strenuous exercise and thereby increasing insulin production, can help. Magnesium is found in every cell of the body, all 60+ trillion—bone, muscle, soft tissue.  It’s a player in more than 300 enzymes involved in nerve transmission, muscle contraction and energy (ATP) production. A taxing workout sacrifices magnesium, making repletion necessary.

Since we’re working with muscles, let’s take a minute to look at the most important one—the heart.  In a cell—and in every cell—calcium tells sodium to start a contraction, as when lifting a pencil from the table.  Afterward, magnesium tells potassium to relax and to put the pencil back down. Simple, right? But there’s more. If one of the initiators is in short supply, say calcium or sodium, the heart will forget the words to the next verse, causing it to get stuck in an irregular skip.  The same holds for the relaxing electrolytes, but in the second half of the heartbeat. 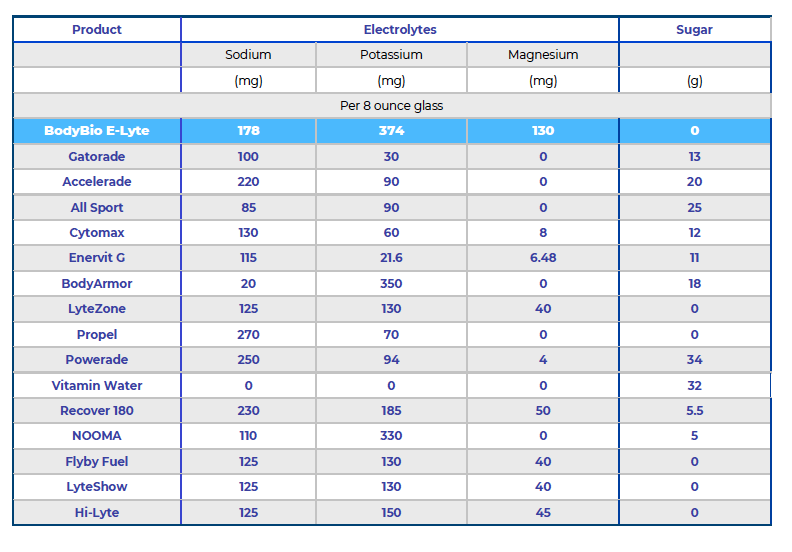 Replacing spent electrolytes, whether from a heated work environment, a formidable workout or a sickness like the flu or diarrhea, needs to be deliberate.  Too many sports drinks and electrolyte replacement beverages are loaded with ingredients that neither belong nor are necessary. In fact, some might interfere with electrolyte uptake and assimilation/function.  Artificial sweeteners and colors, natural sweeteners like sugar and insufficient levels of added nutriments offer nothing but jeopardization of electrolyte character. There is a solution to the bewilderment of the sports drink aisle—E-Lyte Balanced Electrolyte Concentrate, a well-received electrolyte replacement used by Olympians, marathoners and professional athletes to considerable acclaim.  Designed to mimic the electrolyte concentrations of human blood, this product from BodyBio offers endurance, fluidity and superior performance to any athletic venture.  It prevents hitting the wall like nothing else in the public domain.

About the Author:
Dr. Wnorowski is a widely published biomedical nutritionist, Board Certified in Integrative Medicine, with post-doctoral study from Purdue, Tufts and Johns Hopkins Universities, focusing on the clinical management of obesity, diabetes education, men’s and women’s health and cardiac rehabilitation. He has a PhD and certifications in clinical/biomedical nutrition and master’s degrees in human nutrition and educational psychology. He is the founder of Nutricom, LLC, a provider of current research in integrative/functional medicine and food science. A member of the Academy of Nutrition and Dietetics and the American Association of Integrative Medicine, he sits on the board of Mohr Results Sports Nutrition. Dr. Wnorowski was the honored recipient of the 2006 Excellence in Practice Award from the American Dietetic Association.