Concussions in high-contact sports like football and hockey have garnered plenty of attention, but there has also been increasing discussion of the incidence of head injuries in the sport of soccer. Contact with the ball on headers, with opponents on 50-50 balls and the occasional stopped kick have always been part of the game, and with a reported two in 10 high school athletes playing contact sports—including soccer—suffering a concussion (and girls soccer players taking the second-most of all high school sports), there is a brighter spotlight on the sport than ever.

Virginia Tech studied various headgears devised by numerous companies, with the Gamebreaker AURA earning the highest scores of more than 20 models tested. The Virginia Tech Helmet Lab impact tests measured the linear and rotational acceleration of the head that occurs in soccer impacts. 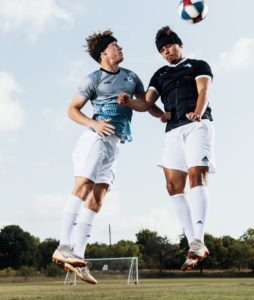 In an article published in 2018 by Virginia Tech, Mark Begonia, Director of Testing at the lab, “There’s a risk of injury in any sport, but protective equipment can reduce that risk significantly. “Our job is to get independent, evidence-based information out there to players, coaches, and parents, so that they can choose the equipment that’s most effective.”

Mike Juels, president of Gamebreaker, in seeking to create a headgear that player would want to wear, told SportsMd that design was key.

“I advised our development team not to bring this item to my desk until it did not look like safety, meaning, we wanted to create SWAG that just so happened to be safe,” he said. “Nearly all female players wear some type of headband or hair band and now they can switch to this and at the best layer of player safety available.”

Juels discounts the idea that the additional protection might come at the cost of more aggression by athletes. “Simply put we are a headgear that offers no face protection and has no face mask,” he contended. “Athletes use their heads as weapons when they have a facemask. Otherwise they simply do not.”

Juels also notes that the headgear also offers others on the field some protection. “If a player’s head incidentally contacts another athlete anywhere with the AURA their headgear the opposing player is safer,” he added.

Developed for all ages and skill levels, the AURA is offered in a variety of colors with the option to place team/league logos on the headgear and both models are machine washable. Gamebreaker works directly with leagues and teams to provide reduced pricing rates for bulk purchases.