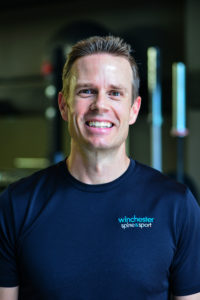 Primates have been throwing objects for millions of years. Perhaps baseball pitching is an artificial version of what throwing was during paleolithic times. Most likely, throwing was not initiated from a stationary position like pitching. Pitching is unique when compared to other sports for the same reason. For example, throwing a spear at an enemy or prey probably initiated from a more dynamic situation. Tearing of the Ulnar Collateral Ligament (UCL) has been occurring at an epidemic rate over the last 30 years in baseball. UCL tears usually require Tommy John surgery for the pitcher to return to play at a high level. Although the reasons are multifactorial, the most common reason for these tears is non-ideal pitching mechanics. Poor pitching mechanics always lead to timing errors which lead to overload of ligaments and tendons in the pitching arm.

It is said that throwing a baseball is the most violent movement in all of sports. The shoulder is internally rotating at 7500 degrees per second. The distractive forces can reach 1270 newtons in the upper extremity. How does the body reconcile these forces? Often, not very well. Injury is an amalgam of circumstances that can culminate into tissue failure. Rarely is only one factor involved.

Biomechanics will always have a major role in the autopsy of non-traumatic sports injury and the UCL is no different. However, hormone levels, metabolic changes, auto-immune issues, load, training, fatigue, previous injuries, musculoskeletal imbalances, and congenital anomalies are other causes worth considering. There is no shortage of beliefs and opinions on optimal biomechanics. When looking at risk factors for athletic injuries, a great starting place is durability and success. In professional baseball, 300 game winners is a logical starting place.

Not surprisingly, these 26 athletes have a lot in common in their mechanics. Contrast this group with the 1300 athletes who have had Tommy John surgery. Clearly, there is a vast difference between these two groups when certain metrics are observed. Pitching can be a sport of attrition if the biomechanics are not ideal: meaning, in high school and even college pitchers can pitch in an incorrect stereotype and not report pain and injury because of good healthy tissues in their joints, ligaments and tendons. As their career continues, however, their tissues will eventually break down and ultimately end in failure. This failure may be catastrophic and the pitcher will feel a distinct pop in the medial portion of their elbow or it can happen slowly and be more of a degenerative tear.

In an attempt to throw harder, the biomechanics in baseball pitching have changed drastically in the last 30 years. These harmful adaptions have created a timing flaw. Ideal pitching mechanics allows the shoulder and elbow to stay in as neutral position as possible throughout the throwing motion. Having the forearm in a more vertical position as the front leg foot enters the ground has been shown to be important. The energy derived from pitching is through muscular slings (figure 1). Most specifically, the anterior and posterior muscular oblique slings. Assessment of the anterior oblique sling can be show in Figure 2. The best pitchers in Major League Baseball can elongate and activate these slings in the most effect way. However, the position the arm is in when these powerful slings are activated is a key determining factor of future injury. During the windup, if the elbow is initiating the motion toward the sky, a fatal flaw in timing occurs. Instead, we want to see the ball and hand (not the elbow), lead the way into the cocking phase of throwing.

A common term you will hear in pitching is “opening up early.” This simply means that the rib-cage has begun to rotate before the front foot (glove side) has entered the ground. Ideally, when the front leg enters the ground, the rib-cage should still be facing third base (referencing a right handed pitcher). This is critically important because it allows for more stretch of the anterior oblique sling. If the torso incorrectly begins to rotate before the front leg foot is on the ground, then this sling has no support to pull from. This has been likened to shooting a cannon of a canoe. Unfortunately, this timing error also leaves the arm in a vulnerable position and can lead to UCL and shoulder injuries along with poor performance.

The pitching motion is very complex and technical, but these are some key signs to know if the timing is off. Flaws in pitching mechanics is the single most important reason for UCL injuries. These key flaws disrupt the natural timing of the throwing motion. Modern phones with a slow-motion option for video recording have made seeing these flaws much easier.

Brett Winchester is a Doctor of Chiropractic near St. Louis, Missouri. He serves as a consultant for several Major League Baseball teams and is an advanced biomechanics instructor at Logan University’s College of Chiropractic. Dr. Winchester is the founder of Winchester Spine & Sport in Troy, Missouri. In addition to treating patients, he lectures throughout the world and has been featured in numerous chiropractic journals.