Athletes tend to do a good job of training their muscles, heart and lungs. But some of them (particularly endurance athletes and those in running sports) commonly fail to train their gut. As one marathoner reported, “I was so afraid of getting diarrhea during long training runs that I did not eat or drink anything beforehand. I really struggled after 14 miles…”A high school soccer player admitted, “I’m so afraid I’ll throw up if I run with food in my stomach.” He ate only a light lunch at 11:00 and then practiced on fumes at 3:30. No wonder he had a disappointing season.

An estimated 30-50% of endurance athletes (including up to 90% of distance runners) have experienced gastro-intestinal (GI) issues during and after hard exercise.

They fear bloat, gas, nausea, stomach cramps/pain, side stitch, diarrhea, vomiting, and urge to defecate. These issues arise during long bouts of exercise because blood flow to the gut is reduced for an extended period of time. When combined with dehydration, elevated body temperature and high levels of stress hormones, normal intestinal function can abruptly end.

If you are an athlete with a finicky GI tract, restricting your diet before and during exercise will not solve the problem. You want to learn how to train your gut to accommodate performance enhancing carbs and water. That way, you can train better—hence compete better—without stressing about undesired pit stops.

Thankfully, the gut is trainable. Competitive eaters have proven this point. Google Nathans’ Hot Dog Eating Competition and watch thevideo of a champ who stuffed 72 hotdogs into his stomach in 10 minutes. Clearly, he had to train his gut to be able to complete that task.

Competitive eating is unlikely your goal, but you may want to be competitive in your sport. That means you need to fuel wisely in order to perform optimally. While some “keto-athletes” choose to train their bodies to rely on fat for fuel (fat is less likely to cause GI distress), training the gut is a far easier alternative for most of us.

The following tips can help you exercise with digestive peace. 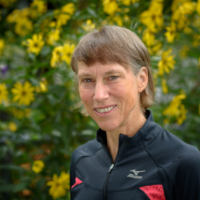 Nancy Clark MS RD CSSD has a private practice in the Boston-area where she helps both fitness exercisers and competitive athletes create winning food plans. Her best-selling Sports Nutrition Guidebook, and food guides for marathoners, cyclists and soccer players, as well as teaching materials is available at www.NancyClarkRD.com or contact Nancy at (617-795-1875).