Facemask design in football has come a long way from the single-bar pieces that first became common in the 1950s to various types adapted to the needs of specialized position play throughout the decades. And while safety and player protection in regards to the helmet usually focus on the crown and padding, the facemask is another critical item that can aid in this area.

At first, masks were screwed directly into the helmet; later the manufacturers used clips, allowing them to be exchanged and repaired more easily. They are easily recognizable on helmets dating back decades with the original Shockblockers, popular in the 1980s, but there haven’t been many innovations in this particular area, at least those known outside of the industry. 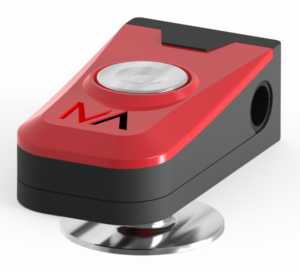 Now Michigan-based Mayfield Athletics tries its hand at advancing the technology with its newly patented S.A.F.E.Clip, a facemask clip—the acronym stands for “Shock Absorbing Football Equipment”—it claims has been shown to reduce impact to the head by up to 35% for football players.

“We have spent years perfecting our design and investing in the proper testing to achieve our ultimate goal of increasing the well-being of all football players,” commented Justin Summerville, chief executive officer, Mayfield Athletics. “We recognize and understand our product has the potential to revolutionize the game of football, and we take that responsibility very seriously.”

Summerville continued: “In our minds, achieving a patent was crucial to further solidify our product’s innovative and effective design. Partnered with our patent, we have received valuable feedback from our various test sites throughout the country, as well as our current customers, to develop our Generation 2 S.A.F.E.Clip, which is currently patent pending.”

Independent testing at NOCSAE-approved laboratories demonstrated the S.A.F.E.Clip dampened blows to the face and diminished the g-forces before they could reach head/neck area by up to 35%.

While some of the major helmet manufacturers, including Schutt, Riddell and Xenith, have proprietary facemasks that will only fit their helmets, Mayfield notes that S.A.F.E.Clip can be retrofitted to more than 95% of existing helmet and facemask configurations without any alteration, and takes only a few minutes to install. Other companies that produce facemasks include Vengeance, DNA, Super Pro XL, Speedflex and S-Bar.